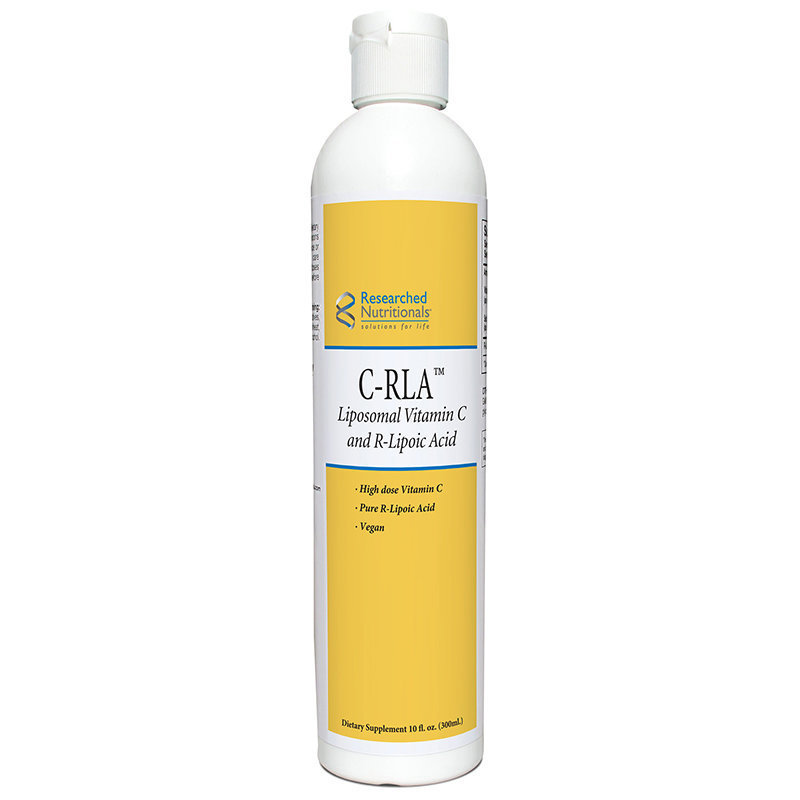 C-RLA™ offers doctors and their patients a safe, efficacious delivery system of High Dose Vitamin C and R-Lipoic Acid in one formulation. The sunflower-derived phospholipids (non-soy product for those with soy sensitivities) are GMO-free and 100% vegetarian.

Each serving contains 1500mg of Vitamin C and 70mg of R-Lipoic Acid in a natural (GMO-free) liposomal preparation. As most oral Vitamin C doses above 250mg are very poorly absorbed, the only efficacious high dose oral delivery system is via liposomes from natural phosphatidyl choline. Many doctors supplement in-office Vitamin C drips with C-RLA™ so the patients continue to receive the benefit of high-dose Vitamin C without stomach distress.

Lipoic Acid – a vital antioxidant
Antioxidants such as lipoic acid prevent oxidative stress (the damage created within cells from aging and even exercising — new research talks about the need to control oxidative stress as an essential component to healthy aging) by neutralizing free radicals and reducing oxidative stress. Lipoic acid is an unusual antioxidant because it can act in both water-soluble and fat-soluble domains in cells and tissues. Thanks to these qualities, it is easily absorbed and transported into many organs and systems within the body, for example, the brain, liver, and nerves. Contrast this with antioxidants such as vitamin C, which is not very lipid-soluble (so is not able to penetrate the lipid wall of cell membranes very well), or vitamin E, which is not very water-soluble. When lipoic acid is combined with these antioxidants, the body’s ability to fight free radicals is greatly increased. It also has the property of regenerating vitamins C & E so you get more punch out of those antioxidants.

Lipoic acid helps amplify the positive effects of other important antioxidants in the body such as glutathione and coenzyme Q10—two essential compounds in the fight against aging and disease. It also teams with the B-vitamin family to support energy production in the body by converting the components of food, namely carbohydrates, proteins, and fats, into stored energy for future use. Lipoic acid does this by helping to protect mitochondria, the energy-producing factories of cells, from being damaged by oxidative stress, thus ensuring that energy production in the body remains efficient.

“R” Form of Lipoic Acid
Alpha-lipoic acid consists of two different forms (isomers) that have vastly different properties. The “R” form is the biologically active component (native to the body) that is responsible for lipoic acid’s phenomenal antioxidant effect. The “S” form is produced from chemical manufacture and is not very biologically active. Typical alpha-lipoic acid supplements consist of the “R” and “S” form in a 50/50 ratio. Another way of looking at it is if you prescribe 100mg of alpha-lipoic acid to a patient, the patient will only get the benefit of 50 mg of active “R” form. The human body normally produces and uses the “R” form of lipoic acid. As a powerful antioxidant, it also promotes healthy mitochondrial function.* R-lipoic acid by itself may be 10 times more effective than other forms of lipoic acid and has been called the “mitochondrial antioxidant” because it is a key component of mitochondrial dehydrogenase complexes, which may help to slow the natural aging process in animals. The pure R-Lipoic Acid in C-RLA™ supports a healthy inflammatory response and is a potent free-radical scavenger.*

Suggested Use: As a dietary supplement, take two teaspoons (10 mL) daily in water or juice, away from food or as directed by your healthcare professional. Additional doses may be taken. Shake before using.