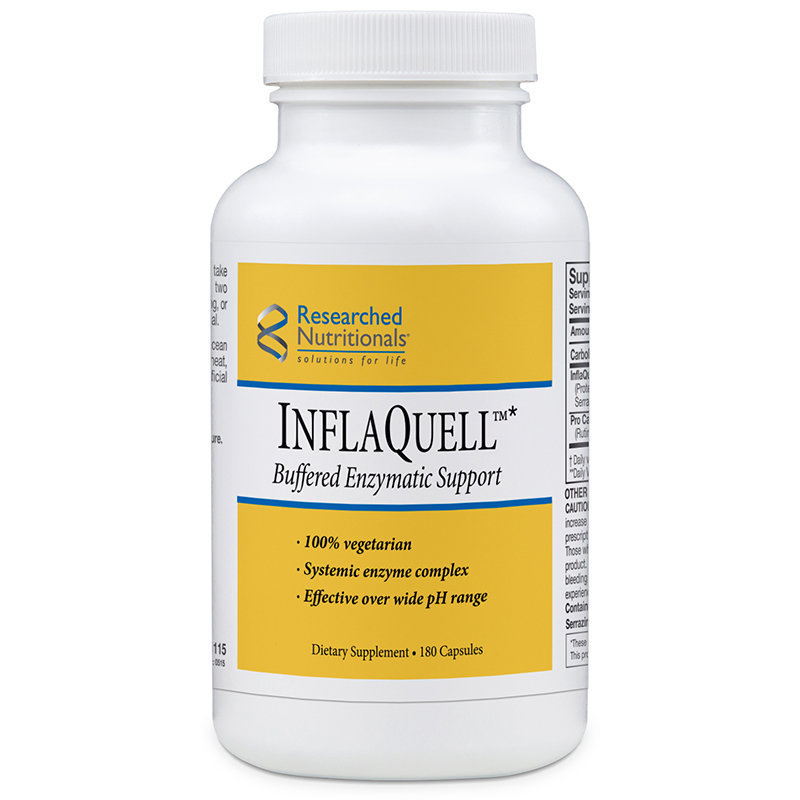 InflaQuell™ is a proteolytic enzyme system formulated to promote a healthy inflammation response by the body.

Features & Benefits:
• Buffered with ginger for your patients’ sensitive stomachs
• 100% vegetarian formula removes the concerns about porcine or bovine based products
• InflaQuell™ works in a wide pH range (2.75 – 7.8), providing optimal absorption versus animal sourced enzymes which work well only in a more alkaline medium
• Wide pH range eliminates the need for enteric coating, which may cause inconsistent absorption and product performance
• Uniquely formulated to promote a healthy inflammation response versus a general enzyme product formulated for both digestion and inflammation support

What is Inflammation?
Inflammation is a normal process which protects the body from infection and foreign substances. It is also the body’s immune response to irritation, injury, or trauma. In most cases, the body responds instantly with a full frontal attack. A host of chemical compounds known as inflammatory mediators regulate the entire process; these include histamine, prostaglandins, kinins, leukotrienes and a group of plasma proteins making up the complement system. Their function is to choreograph the vascular and cellular effects of inflammation. Blood flow to the injured area increases, while blood flow away shuts down. Blood vessels become more permeable, fluid seeps into the tissues, and the capillaries become engorged. These events all result in three of the four cardinal signs of inflammation: swelling, redness and heat.

When is Inflammation Unhealthy?
In some diseases and conditions, without the presence of foreign substances, the immune system triggers an inflammatory response by sending its soldiers (immune cells) on a search and destroy mission unwittingly against it own organs and tissues. Such conditions are called autoimmune diseases. This type of chronic inflammation wreaks progressive damage to tissues and organs and contributes to a wide variety of patient health issues.

What are Proteolytic Enzymes?
Enzymes work with the body’s innate mechanisms to promote healing and allow inflammation to progress naturally. They support the production of various cytokines, activate large proteins, such as alpha-2-macroglobulins, and slow the clotting mechanism, which provokes a healthier healing response. Proteolytic enzymes refer to the various enzymes that break down protein into smaller units. These enzymes include the animal based pancreatic proteases chymotrypsin and trypsin, bromelain (pineapple enzyme), papain (papaya enzyme), as well as the plant or fungal proteases, and serratio-peptidase (the “silk worm” enzyme).

Why is InflaQuell™ so Unique?

Suggested Use
As a dietary supplement, take three capsules twice per day at least two hours after eating or one hour before eating, or as directed by your health care professional.

Cautions
This product may increase the absorption and distribution of certain pharmaceuticals. If taking prescription medication or if pregnant or nursing, consult your prescribing physician before taking this product. Systemically used proteases have anti-thrombic actions. Persons with bleeding disorders, or those who are taking anti-thrombic medications, may experience increased clotting times. This product may irritate gastric ulcers.

5 Bracale, G. and Selvetella, L. “Clinical Study of the Efficacy of and Tolerance to Seaprose S in Inflammatory Venous Disease. ” Minerva Cardioangiol. 1996. 44(10): 515.